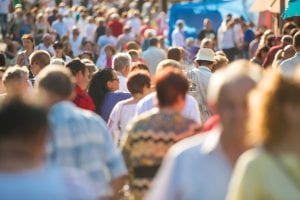 Cast your mind back to a time long past – the 1970’s. Very few people were overweight and an even smaller number had type two diabetes. Now think about what people tended to eat in those days.

Now ask yourself the same questions about the situation today.

When it comes to weight the major change was the introduction in the early 1980’s of low-fat dietary guidelines. A glance at a graph of obesity rates versus time shows a clear inflection point changing from a flat line to an incline at that time.

A  BMJ 2015 paper concluded -“Dietary recommendations were introduced for 220 million US and 56 million citizens in the UK in 1983, in the absence of supporting evidence from randomised control trials”. Add 20 million Australians.

Food sales show that the public has followed this advice over the last 35 years. We have done what we have been told.

The human body does not want more than a certain level of glucose in the bloodstream and works hard to achieve this. When we eat carbohydrates (not just sugar) the body produces insulin. This hormone causes us to convert glucose into fat for storage. When we release insulin, the body is in fat storage mode. When we release insulin over and over again for many years the body becomes resistant to its effects. After this becomes type two diabetes.

Fats and proteins in the diet have much less effect on insulin release.

Our 1970’s ancestors ate full fat foods, meat and three veg and eggs. They did not eat low fat foods. When fat is extracted from a food something else is inserted and that “thing” is mostly carbohydrate. Their grain intake was far lower than today.

A quick glance at the food pyramid shows that grains and other carbohydrates are the base of the pyramid.

It is probably not surprising that by changing our dietary patterns from one where few people where overweight to one where fat storage would increase that, we are where we are today.

Even if this could not have been foretold, applying basic physiology to the real world results over 35 years provides the answer.

And it has. Yet it is at best ignored and at worst strongly opposed.

But before revealing the (not so secret) answer it is worth observing that the recent ACE Obesity Policy 2018, it was not amongst the top 16! The top suggestions were an assortment of taxes and bans on advertising. A fuel excise of 10c was one idea.

Interestingly this plays into the other long held belief which has been found not to be the case – that a calorie is a calorie. In pure energy terms it is, but as metabolised by the human body calories are not all equal. Calories from carbohydrates, via the insulin system are converted into fat for storage. The reason why many seeking to reduce weight fail is that while their body is in fat storage mode it is remarkably difficult to burn fat.

Even exercise (unless for multiple hours a day) will not burn fat while you are in fat storage mode. Hence the increasingly held view that you cannot out run your diet. Exercise has many health benefits separate to weight loss though.

ThePURE (Prospective Urban Rural Epidemiology) study, of over 135,000 people in 18 countries showed no association between fats in the diet and any adverse health outcome. It found that a low fat (high carb) diet was associated with higher rates of illness and mortality. More recent work found low carbohydrate diets to be able to reverse type two diabetes.

Those who have abandoned the low fat mantra and adopted a lower carbohydrate, healthy fat eating approach (of which there are many variations) find that they are less hungry, and are able to reduce weight. The book Fat lot of good By Dr Peter Bruckner (former test cricket team physician) is an excellent book on this topic.

Doctors worldwide who have looked at the science and recommended this approach have not only not been thanked, they have been subjected to witch hunts. This includes Dr Gary Fettke in Tasmania who after over four years of investigation based on an anonymous “complaint” for advising patients to eat less sugar and carbs had all findings against him overturned and received an apology from the regulator.

For reasons best known to themselves, most in public health seem more interested in wringing their hands and arguing for ineffective measures like tax increases than supporting measures which are consistent with human physiology.

As I have observed previously, government is not the solution to the issues of obesity. Neither is more of the same from those who arguably have (perhaps inadvertently) created the problem.The US Preventative Services Task Force (USPSTF) reviewed weight loss interventions in 62,000 people through 122 studies finding that behavioural change is the best option.

If we want a different result, we need to do things differently.

Those wanting to reduce weight in 2019 should do their own research.Ask your grandparents or parents what they ate before the early 1980’s. It is not difficult and not radical.  The power to change is in your hands.