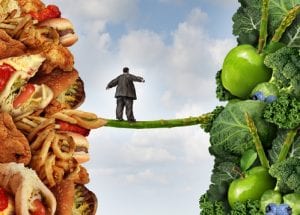 As the year draws to a close the diet wars are heating up. On one level this is good because the truth is bobbing up in more and more places. On another level it is sad that many intelligent people in health prefer to cling to ideology rather than accept that the ideas about fats in the diet, which hail from the 1970’s, have been conclusively shown to be wrong.

In the Journal of the American Medical Association Dr David Ludwig of Harvard wrote “Lowering the bar on the low fat diet”. Below is an extract.

“The recent revelation that the sugar industry attempted to manipulate science in the 1960s1 has once again focused attention on the quality of the scientific evidence in the field of nutrition and how best to prevent diet-related chronic disease.

Beginning in the 1970s, the US government and major professional nutrition organizations recommended that individuals in the United States eat a low-fat/high-carbohydrate diet, launching arguably the largest public health experiment in history. Throughout the ensuing 40 years, the prevalence of obesity and diabetes increased several-fold, even as the proportion of fat in the US diet decreased by 25%.

Recognizing new evidence that consumption of processed carbohydrates—white bread, white rice, chips, crackers, cookies, and sugary drinks—but not total fat has contributed importantly to these epidemics, the 2015 USDA Dietary Guidelines for Americans essentially eliminated the upper limit on dietary fat intake.2 However, a comprehensive examination of this massive public health failure has not been conducted. Consequently, significant harms persist, with the low-fat diet remaining entrenched in public consciousness and food policy. In addition, critical scientific questions have been muddled”.

A piece in the BMJ by Nina Teicholz in 2015, which was critical of US dietary guidelines saying they were not based on good science, was challenged. The call for the article to be retracted was refused after a review of the article found no significant issues.

Dr Fiona Godlee, The BMJ’s Editor in chief said: “We stand by Teicholz’s article with its important critique of the advisory committee’s processes for reviewing the evidence, and we echo her conclusion: ‘Given the ever increasing toll of obesity, diabetes, and heart disease, and the failure of existing strategies to make inroads in fighting these diseases, there is an urgent need to provide nutritional advice based on sound science.’”

Nina Teicholz commented: “I am very grateful to The BMJ editors for their profound commitment to verifying the facts of my article and for their professionalism and integrity throughout this process. I am also grateful that they are providing a space for rigorous scientific debate, especially on a subject so important to public health. I hope the original intention of that article can now be fulfilled—to help improve nutritional advice, so that it is based on rigorous science. This will help us to better combat nutrition related diseases that have caused so much human suffering around the world.”

Back in Australia Dr Gary Fettke has been banned for talking to patients about nutrition after he recommended a lower carb and higher fat diet. Like Gary Taubes in the USA who first wrote about these issues in 2002 and was pilloried by the establishment, Fettke will in time also be vindicated. Unfortunately this is not much help today. On the plus side, the Senate inquiry into AHPRA has been very critical of its handling of vexatious complaints.

Pages on Facebook are critical virtually to the point of defamatory about those who question the orthodoxy that fat is bad in the diet. I suppose when reputations, dollars and egos are on the line, people get defensive and lash out.

This battle is gathering steam. Whilst the facts are on the side of those who support eating less carbohydrates, especially processed carbohydrates, facts are not all that matter in public debates.

I continue to urge all of you to do your own research and find what is best for you. In particular though, be wary of dogmatic experts and be wary of government advice on nutrition. More likely than not, it will be wrong.

The simple guide remains to eat mainly food which is not processed, food which till recently was moving around or growing somewhere, food which has no labels and unless frozen would go off in a short space of time.

As Jamie Oliver reportedly said, “real food does not have ingredients, real food is ingredients”