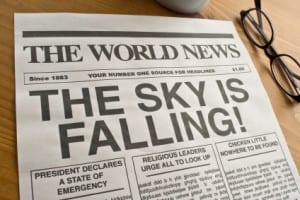 With all the hysteria about influenza this year you would not think it could possible get worse? Well apparently it can and it will – even if we do not know when or where. And of course we are all just sitting ducks totally unprepared.

Whilst an article of mine about flu was published on Perth Now  this week, the alarmist industry has been in full cry. According to an article in The West Australian newspaper, ”W.A’s leading medical experts say a lethal virus capable of killing millions of people as in the Hollywood blockbuster Contagion is likely”.

The story went on to describe a Federal health committee meeting to discuss Australia’s capacity to respond to a national or global health crisis. It was attended by a number of W.A experts including the head of the Health Departments communicable disease control directory Paul Armstrong. He was quoted describing Contagion as a realistic movie and said “It will happen at some stage in the future…”

Please note that this was not it might happen or the potential is there but it will happen; the only question being when? Suggestions varied from next year to in a hundred years. This is certainly allowing plenty of margin for error.

We were also told that it would be much bigger than SARS of Swine flu. Well it could hardly be much smaller.

The reality is that over the last 100 years each “epidemic” has been smaller than the one before but the hype bigger. In 1918 it is estimated that 30% of the worlds population fell ill with influenza and some 500,000 died in the USA alone.

In 1918 we were at the tail end of World War I. The world was a completely different place particularly with regards to living conditions and sanitation. Yet it remains the example used to show what can happen. It is also worth remembering that in 1918 the flu virus had not even been discovered!

More recently SARS in 2003 caused 800 deaths worldwide. Experts had predicted that tens of millions could perish. Avian flu was predicted to cause up to 750,000 deaths. The final tally was 262. A neat history of scares appeared in The Guardian.

And in 2009 we had swine flu. Predictions of millions of deaths were made. Billions were spent on vaccines for this killer, which caused fewer deaths than regular flu. The New York Times reported that some 64% of the experts advising the American CDC had potential conflicts of interest in that they had financial ties to vaccine makers. The European Commission was going to look into this whole matter but I have not been able to find any conclusion or findings.

Even the jargon is scary. Level 5 pandemic sounds really serious till you find that all it signifies is that there has been human-to-human transmission of a virus in two countries in a WHO region. One person in France and one in Germany pass on a flu and it is pandemic level 5.

Find a case in Australia (or other country in a different WHO region) and you have Level 6 pandemic – the highest level!

So as the real threat declines the hype increases. This latest threat is unspecified in nature and timing – so as to maximize the dramatic effect.

In the book Scared to Death by Christopher Booker and Richard North health scares are brilliantly defined as having four components:

1 The source of danger must be universal so anyone can be affected.

3 Whilst the scientific basis of the scare must be plausible there must also be an element of uncertainty to allow for alarmist speculation.

4 Societies response must be disproportionate.

Whilst we have not gotten to phase four here, this latest threat hits all the right notes.

Now clearly there is no money to be made from vaccines for a virus, which has yet to be identified. But it always pays to follow the money. The experts predicting the calamity always offer to solve their imaginary problem.

The article described an “overwhelming call for a national centre…” and how “national resources had to be bolstered before an outbreak exposed existing systems as inadequate”.

Translated this means government funding so that the doom and gloom “experts” can build an empire capable of dealing with this threat. Give us money and we will keep you safe from harm. Obviously the more money the better the protection offered.

Yet history shows that in the last decade we have had not one, not two but three calamitous threats, which the national resources coped with adequately. And this applies worldwide.

Furthermore every prediction of the experts has been wrong! And not just a bit out but way off the mark. They claim in their defense that it is better to be cautious and over prepared. However they have no qualms about being anything but cautious with wild predictions of bodies in the streets.

I am over scare mongering. The facts are clearly at odds with the expert predictions for the last three disasters. To quote Richard Feynman “Science is the belief in the ignorance of the experts”.

The experts, in my opinion, lack credibility. The sky is not falling. It is time for the Chicken Little’s of this world to stop peddling fear.