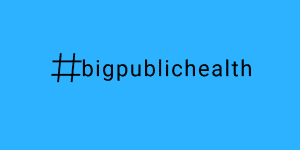 Those following me on social media may have noticed the hashtag that I have started- #bigpublichealth. Some have asked what does this mean and why have I done it.

Good questions. Below is my explanation.

We are forever hearing about big tobacco, big food, big pharma, big sugar and just to round it out big banks. These terms are used derisively to imply that the size of these amorphous groups is of itself a problem and that due to size, their influence is considerable.

There is some credence to this view. The lobbying power of the pharmaceutical industry is significant, especially on the USA. Allegations have surfaced about the behaviour of the sugar industry in paying researchers. The food industry, of course wants to protect its position. The tobacco industry has negligible power these days.

However, not one of these groups has the express backing of governments. Not one of them is able to dictate policy. None are paid for by the taxpayer.

So which group is funded by government, through taxes, is able to dictate policy, establish guidelines, attack those who question it and never admits when it is wrong?

The answer is public health. Of course, it claims to be small and powerless. This is nonsense. It has government money and power behind it. They get to make rules and policy. And when it is wrong, there is no accountability.

As a doctor I am legally responsible for everything I do and can be sued if I make an error. In fact, I can be complained about to the regulator anonymously for simply getting out of bed in the morning.

If I give faulty advice I am liable.

What about public health? Is it liable and accountable for faulty advice? Let’s examine three examples.

The most egregious is the low-fat dietary guidelines introduced in the early 1980’s with no scientific basis and which have coincided (some would say lead to) the increased rates of type two diabetes and obesity we see today. The jury is in and we have received faulty advice. We should not be avoiding eggs, red meat and full fat foods. The problem is sugars and processed grains. The PURE study is the best example of where real science has trumped ideology but there are many others.

What we have seen are attempts to silence those who question the edicts of big public health. Witness the cases of Gary Fettke and Tim Noakes. Those interested in the history should read this excellent piece by Belinda Fettke.

International figures show that where vaping is supported as tobacco harm reduction, smoking rates amongst adults are declining and youth smoking is also in decline. Yet public health in Australia continues to stick its fingers in its ears and go la la la la la. A colleague has wondered if a clock should be set up to count every time a smoker dies in Australia due to the antipathy to vaping.

Is there any accountability? Is there even a requirement to examine real world data?

Lastly is our approach to drugs and alcohol. Prohibition does not work and never has. If the aim of drug policy is to stop use, it isn’t working. Much like alcohol prohibition in 1920’s USA (those with Netflix should watch Making of the Mob) it has enabled organised crime to flourish and profit. It also has set the perfect scene for corruption. Plus, it fills jails with people who have committed no crime against another person.

When it comes to handling alcohol, we can learn much from the Europeans.

Not all of you will agree with me on the third example which is absolutely OK.

The influence of tainted guidelines in various medical conditions has also been exposed but nothing has been done. Up to 84% of those sitting on panels have financial conflicts of interest.  Nothing to see here – move along.

The damage done by the low fat dietary guidelines, which have been followed by the public (as witnessed by food sales) is massive. The cost of opposition to vaping is being paid for by smokers who can’t quit.

It is time that the faceless people who inhabit the ivory towers of #bigpublichealth were held accountable for what they do.

For those inclined to do so, I welcome your use of the hashtag – maybe we can go viral. And maybe we can bring about accountability and change for the better.