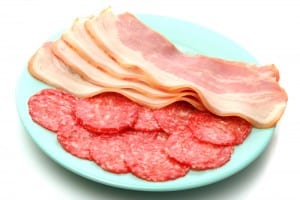 It is amazing that anyone is left alive and that life expectancy continues to increase. Some 984 substances have been categorized by the International Agency for Research on Cancer (a WHO subsidiary), in order of carcinogenicity. Only one was found not to be carcinogenic. Sadly you can’t eat caprolactam as it is used to make synthetic fibre.

Joe Jackson in 1982 sang, “Everything gives you cancer”. He was right!

So what are we to make of the major scare last week about bacon, processed meats and red meats being a cause of cancer? An 18% increased risk of cancer and bacon as bad as smoking – a level one carcinogen?

The answer is not much. To be completely frank – it is best ignored. The stress of worrying about what you can’t eat a bit of will do more damage than a couple of strips of bacon.

Some may blame media reporting but to be fair, the media reports what it is presented with. Sadly the media is often reluctant to question health claims from “authorities”.

According to the WHO’s own figures the risk of cancer increases from 5% to 5.9% if one ate two strips of bacon every single day. Most people will tend to eat bacon a couple of times a week at best. But even at 365 days of every year for 50 years the risk goes up 0.9% in real terms. The figure of 18% is based on what 0.9% represents as an increase from five precent.

This is the “relative risk” and is always much higher than the real risk and hence is the one more likely to get a headline. An 18% increase sounds much worse than a 0.9% risk.

Whether this is done to be deliberately misleading and scaremongering or whether the WHO just has no capacity to explain itself – you can make up your own minds.

Some people choose to be vegetarian or vegan. That is perfectly fine and a choice that they make. Others choose not to be and this is equally fine.

But you should make these decisions based on what you feel is right for you, not because of some false scare campaign.

One aspect of food that does not get enough attention is the enjoyment. Yes good food provides nourishment, and this is a pillar of health. Animal based food can be part of this nourishment. But good food is also a pleasure, in the cooking and the eating. Eating in the company of those we hold dear enhances this further.

Sadly the WHO has somewhere lost the plot. As I wrote a few weeks ago, on its own figures, life expectancy in Europe was increasing and projected to increase further. Yet the headline was all about people doing the “wrong things”.

When Ebola hit, the head of the WHO was more interested in a tobacco conference in Russia than in dealing with Ebola in Africa. Seems that nagging people about lifestyle choices is easier than tackling real health problems.

A diet, which has mainly real food (the type that comes from nature) and minimises packaged food is best. Red meat, sausages and bacon can be a part of this.

Meaningless scaremongering is best ignored. As Joe Jackson sang “No caffeine, no protein, no booze or nicotine. Remember, everything, everything, gives you cancer”.