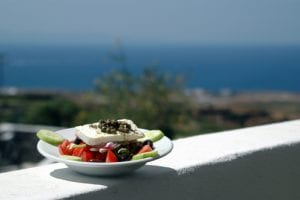 A couple of weekends back it was raining so, instead of going for a run I used the exercise bike. One bonus (some may disagree) of this is that you can watch TV whilst exercising. Food shows are something that I find fun to watch and Rick Stein is one of my favourite “celebrity chefs”.

So whilst I was pedalling away to nowhere Rick Stein was meandering around Greece. He was highlighting the simplicity of Greek cooking with its reliance on fresh produce and simple seasonings. Lemon, salt, lemon juice, olive oil and herbs like oregano were in many of the recipes.

None of the food came in packages. None had artificial additives and none had a star or elephant stamp from the government. One of the small cafes visited only used produce from the grounds it was situated on. This is not practical in cities but the principal of using real ingredients is.

At one point in the program there was a group of men doing a traditional Greek dance complete with the smashing of plates. Stein observed that men in their 60’s being active and eating a Mediterranean diet was just what the proverbial doctor ordered.

He is spot on. Being healthy is actually easy.

This really rammed it home to me that we make health far too difficult. The hand wringing and searches for complex “whole of government” solutions to health problems totally miss the obvious points. Furthermore complex solutions are expensive. One of the arguments in the recent Australian election was about the affordability of the health system.

Of course the problem is that the health system is in fact a disease system. In the same way as it costs much less to maintain a car than to fix it once it has broken down, so too is it much less expensive to maintain the body than to repair it when it has become diseased.

But this goes one step further. Money is wasted on developing star ratings systems for food and on a plethora of “programs” produced by academics in public health.

Everyone runs around saying how expensive and complicated health is. It is profitable to do this as the same people then go to government seeking taxpayer funding for their pet projects.

The reality is that being healthy is not complicated and is not expensive.

The path to good health is built on the basic eight pillars of health.

In a quiet Greek Tavern people are eating real food, not processed, packaged or low fat food. We can do the same. It has been shown that eating healthy is not more costly unless you want to make it so.

They are being active as they dance. We can go for a walk for no cost.

They are enjoying good company and socializing. They are relaxed. They are not gulping down the food so they can get back onto social media. None of this is complicated or costly.

I suspect that they also enjoy a good glass of wine and a laugh. OK, the wine is not free!

Laughter is a major missing component of wellbeing these days. Nobody is allowed to laugh anymore as nobody is allowed to tell jokes lest they be accused of micro aggression. Even worse there is the very real risk of some “triggered” snowflake taking the “offender” to some kangaroo court.

This is compounded by the thought police ready to wag the finger and threaten (and bring) legal action against anything they perceive to be in any way “offensive” to anyone. The end result of offence taking is grievance, which in turn can and has lead to tragic outcomes.

Time to get back to basics with health. Start with real food, relaxation, laughter, activity and good relationships. Your health will be the better for it. 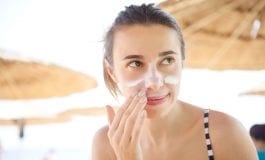