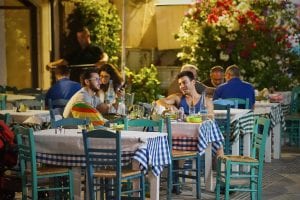 On a recent weekend it was raining so instead of going for a run I used the exercise bike. One bonus (some may disagree) of this is that you can watch TV whilst exercising. Food shows are something that I find fun to watch and Rick Stein is one of my favourite “celebrity chefs”.

So, whilst I was pedalling away to nowhere Rick Stein was meandering around Greece. He was highlighting the simplicity of Greek cooking with its reliance on fresh produce and simple seasonings. Lemon, salt, lemon juice, olive oil and herbs like oregano were in many of the recipes.

At one point in the program there was a group of men doing a traditional Greek dance complete with the smashing of plates. Stein observed that men in their 60’s being active and eating a Mediterranean diet was just what the proverbial doctor ordered.

I suspect he wasn’t thinking of me, as a doctor, not necessary an over 60 (well not yet) – oh well.

This did however, really ram it home to me that we make health far too difficult.  We see evidence of this every day. The sugar tax is the latest panacea because only sugar is apparently the problem and adding 5c to a can of soda will fix the obesity “crisis”.

Then there is the constant hand wringing and searches for complex “whole of government” solutions to health problems totally miss the obvious points. Whilst we all live in a society and that society does have an influence on us, ultimately it is only the individual who can make decisions about and act on their health. The exception being parents who make decisions for their children.

The path to good health is built on the basic eight pillars of health. These are not new. They are not complicated and they do not cost mega dollars.

Returning to Rick Stein, in a quiet Greek Tavern people are eating real food (pillar three), not processed, packaged or low fat food.  They are not obsessing over calories.

They are being active (pillar four) as they dance. They are enjoying good company (pillar seven) and socializing. They are relaxed (pillar six). They are not gulping down the food so they can get back onto social media. They are drinking water (pillar two). All of this happens in an outdoor setting so they are getting fresh air (pillar one).

I suspect that they also enjoy a good glass of wine which despite the finger wagging of public health nannies is not a problem, and a good laugh (pillar eight). They will no doubt go home and have a good sleep (pillar five).

Laughter is another missing component of wellbeing these days. It is compounded by the thought police ready to wag the finger and threaten (and bring) legal action against anything they perceive to be in any way “offensive”. The end result of offence taking is grievance, which in turn can lead to tragic outcomes.

Far from being the solution, government policies such as low fat dietary guidelines, thought police to stop laughter, and banning use of parks for exercise as it wears out the grass, are the problem.

It is time to get back to the basic eight pillars of health. Start with real food, fresh air, water, adequate sleep, relaxation, laughter, activity and good relationships. Your health will be the better for it.