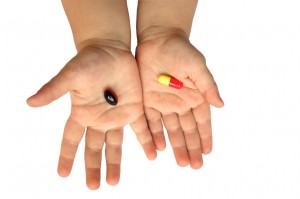 Tom Insel, director of the National Institute of Mental Health (NIMH,) in his recent blog post Are Children Overmedicated? seems to suggest that perhaps more psychiatric medication is in order. Comparing mental illness in children to food allergies, he dismisses the “usual” explanations given for the increase prescribing of medication.

In his view these explanations are; blaming psychiatrists who are too busy to provide therapy, parents who are too busy to provide a stable home environment, drug companies for marketing their products, and schools for lack of recess.  Concluding that perhaps the explanation for increase in prescribing of psychiatric medication to children is a greater number of children with serious psychiatric illness, he shows a lack of recognition of the complexity of the situation.

When a recent New York Times article, that Insel makes reference to, reported on the rise in prescribing of psychiatric medication for toddlers diagnosed with ADHD, with a disproportionate number coming from families of poverty, one clinician remarked that if this is an attempt to medicate social and economic issues, then we have a huge problem. He was on to something.

In conversations with pediatricians (the main prescribers of these medications) and child psychiatrists on the front lines, I find many in a reactive stance. When people feel overwhelmed, they go in to survival mode, with their immediate aim just to get through the day.  They find themselves prescribing medication because they have no other options.

From many I have heard some variation of this statement:  “In light of my inability to address the family dynamics and social-economic circumstances, all I have available is medications to help with the child’s symptoms. I see patients who come from unstable environments, where parents are themselves stressed and overwhelmed. I recognized that a child’s “difficult,” “impulsive,” “oppositional” behavior is most often a communication about family, social, and economic stressors that are making a child’s family less competent at caring for him. However, I lack the resources or the tools to do anything about these overwhelming issues. I hate that feeling of impotence.  So I use the only tool I have, medication. When I can bear to think about it, I recognized that medication is just shutting off the child’s efforts to tell me something – in effect silencing his voice – and that I have become a force for social control.”

When that child is in a school setting, with a high student-teacher ratio, perhaps also with teachers who have little experience working with kids from stressed family backgrounds who are struggling with emotional regulation, the pressure to control the child’s behavior increases significantly. It is not simply that schools have reduced unstructured time (though this is a problem as well.) Medication again becomes an agent of social control. Rather than devote the resources to address the underlying issues, we can use the medication, so effective in the short term, to silence the children.

Insel also does not address contemporary research demonstrating the developmental and relational nature of emotional and behavioral problems in children, well known within the discipline of infant mental health. Referring to “biomarkers” he seems to have an idea that one day we may be able to test for mental illness in children with a blood test or a brain scan.   The importance of safe, secure primary caregiving relationships in healthy emotional development is supported by an abundance of research in neuroscience, genetics, and developmental psychology, One cannot treat emotional and behavioral problems in children by treating only the child.

As knowledge about early childhood mental health makes its way in to mainstream health care, there have been calls for universal screening. But if we are using medication as an agent of social control, we need to be very careful not to put the cart before the horse.

If we do not first have a health care system, and an education system, that has time and space to listen, to support parents, to appreciate the complex interplay of biological vulnerability and environmental stress, to understand the meaning of a child’s behavior, what may happen is that the huge numbers of children who screen positive will have no meaningful, relationship-based treatment available (and the medication/talk therapy dichotomy is another oversimplification- there are multiple evidence-based interventions that support parent-child relationships.)  This together with universal preschool has the potential, unless there is significant change, to result in massive numbers of young children silenced by psychiatric medication.

I wonder if Dr. Insel is himself feeling overwhelmed. Perhaps he realizes that the increase in children with emotional and behavioral challenges, as well as medicating of these children, is a symptom of an enormous social problem. That problem is our society’s undervaluing of children and parents, our failure to devote resources to support healthy growth and development, described by Elizabeth Young Breuhl as childism, or prejudice against children. He has good reason to feel overwhelmed with this realization, as it makes his task as director of the NIMH exponentially larger.

Claudia Gold MD is a paediatrician, writer and director of the Early Childhood Social Emotional Health program at Newton-Wellesley Hospital. She is a graduate of the UMass Boston Infant-Parent Mental Health Post-Graduate Certificate Program.

Visit her blog at http://claudiamgoldmd.com