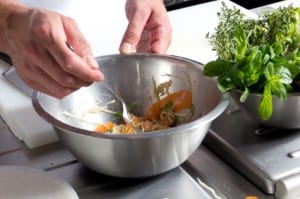 Whilst six nights a week is too often for me, I do like to look at Masterchef at times. The combination of cooking, food and different locations together with the pre-requisite “drama” of reality TV does get one in. The shows recent trip to Margaret River, Western Australia had contestants cooking with fresh seasonal produce in the open air at a winery. This would be a perfect way to spend the day.

This season has, as usual, a diverse range of contestants, many of whom have established careers. According to Roger Wilkinson writing in “The Conversation” part of the appeal to those with middle class occupations like law, teaching or IT is that these roles have suffered an “increased level of bureaucratic reporting, compliance and auditing” which limits their autonomy to do their job.

Whilst there are no doctors in the final group, I would throw medicine into the mix as suffering the same problems. Doctors are forced to spend more and more time complying with petty government edicts and hence are less able to spend time with patients.

Yet when the boot is on the other foot it is extraordinary the excuses offered up. An inquiry into the establishment of The Australian Health Practitioners Registration Authority (AHPRA) showed considerable incompetence and recommended amongst other things that doctors who were wrongly deregistered be sent letters of apology. The chair of the board’s management committee was quoted as saying “I am confident that our action plan comprehensively addresses the areas of concern about early implementation of the national scheme raised with the committee, by individuals and organisations.” Sir Humphrey Appleby of Yes Minister fame could not have put it better.

A newsletter sent to all Australian doctors included the gem “ A major challenge for the Medical Board in the new National Scheme is to ensure that the regulatory processes, rather than being burdensome are designed to support and help doctors to maintain high professional standards and individual responsibility”. This followed on from an acknowledgement that the vast majority of health care workers did what is right not because of regulation but because they are caring, well trained and motivated.

That a newly formed regulatory body finds it a challenge to not be a burden on healthcare professionals is a damning indictment.

I am sure that similar “burdens” of useless bureaucracy afflict many other professions and people in all walks of life. Little wonder there is a high level of dissatisfaction in many workplaces. The problem is not the nature of the work-it is the burden of valueless government bureaucracy all based on the notion that nobody can be trusted – except government and regulators!

Meanwhile back at Masterchef, Roger Wilkinson has captured the essence of the shows appeal. To succeed in the Masterchef kitchen (apart from being able to cook) requires the ability to work in a team but also handle criticism graciously. It is also notable how the contestants, whilst being in a competition, have a genuine regard for each other. He concludes that the show may be delivering what governments and trade unions have not-the promise of a better life.

Certainly happiness comes from doing what we love doing and with people we like spending time with. Sadly many jobs as they are currently configured do not offer this and bureaucracy chokes the lifeblood out of many people who strive to do their best but are not interested in meaningless forms.

It is time to reassess how we do things.