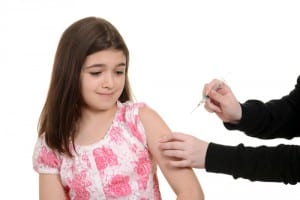 Larissa was an 8 year old I saw regularly in ED. She had a chronic medical condition that will require regular medical attention for the rest of her life…

When I first met Larissa, I arrived at her bedside with the numbing gel in hand. Larissa took one look at it and ignored me. I attempted to explain that she was going to have a blood test when her Mum stepped in. ‘Brooke, she knows what that is for and she says it doesn’t work. She knows what putting it on means. She won’t let you or anyone else do it.’

Very briefly I was thrown off-track. ‘What happened to her?’ I asked her mother. Her mother proceeded to tell me about her past experience when restraint was used.

‘When she had her first IV, she was taken to a room, wrapped up and pinned down. It took 4 adults, including myself, to hold her down so that they could put the IV in. Now, she puts up a bigger fight and it is nearly impossible.’

It is easy to forget about or ignore the unseen psychological damage we can cause a child when we are caring for their physical health, but once you have seen the result of the damage, it’s hard to forget.

Something that seems so small to us, can be traumatic for someone else.

I think it’s safe to say that in your lifetime, you have come across an adult who is petrified of needles. You know what they are like. You only have to mention the word ‘needle’ in a quiet whisper and ka-pow! They’ve turned into a 3 year old climbing the walls while screaming because… ‘Needle? I don’t want a needle!’

Have you ever wondered why such a tiny pin could have such a profound effect on someone? I think I might have the answer for you and it might shock you because we are doing this everyday to our kids without even realising it.

Although her name has been changed, Larissa is a real person and she is suffering. In fact, every time she comes to hospital, she suffers more. The suffering gets worse as she not only has to deal with the fears associated with the present treatment, but during these times she also re-lives the fear and emotions of her previous hospitalisations that have included blood draws and injections.

Now, her response is to avoid and fight.

The part of our brain that activates in these situations is referred to as the reptilian brain. It’s the bit that is left over from our prehistoric days when we needed to make quick escapes. It is highly sensitive to sights and sounds. When it is activated by a threat, it will recruit many areas of the brain to initiate a response such as tightening specific muscles and releasing hormones such as adrenaline. The frontal cortex which deals with reasoning, also makes an assessment and decides if the threat is real. If it is a false alarm, it signals to the reptilian brain, ‘It’s a false alarm! Calm your farm!’ and everything settles back down again. The person literally sighs with relief and relaxes.

In a traumatised person, they are unable to reason and settle the fear response due to the storage of memories of previous traumas distorting their perspective. To us it is a perfectly safe environment, but to them, their memory tells them otherwise. They are under threat! When the cortex does not calm the reptilian brain, the body continues to prepare itself to fight or flee.

Larissa fights. There is no reasoning. So it is decided that treatment needs to be administered against her will and we use restraint… again… and again. She is immobilised by numerous adults at a time. She cannot escape her threat as much as her reptilian brain is trying. This is where trauma occurs- when we are unable to successfully fight or flee threatening situations.

Ok… now bear with me for a second because I am going to explain how this all happens. It’s a bit technical but we need to understand it on some level so we as parents and health professionals can appreciate the importance in avoiding these situations.

When a person is overcome and unable to flee or fight, their body enters into what Dr. Peter Levine calls the freeze response. A person in the freeze response looks like a person in shock – their body undergoes a whole bunch of bodily changes that slow it down. They freeze. Once the danger passes, the person appears to return to normal, however they have just stored the energy and memories of the trauma in their nervous system.

What does all this have to do with Larissa’s restraint?

Levine points out that “one common and frequently overlooked source of trauma in children is routine medical and emergency treatment”. This occurs because children are often placed in situations when being treated that induce a fight or flight response. When they are unable to fight or take flight because of fear of it hurting more, or worse, because a number of adults are using restraint (as in Larissa’s case) – children freeze, and trauma is stored in their vulnerable bodies making them susceptible to re-experiencing the traumatic event when placed in similar situations.

What does this mean for us as parents and healthcare professionals?

When we pin down a child and overpower them in order to perform a clinical task, it is really important to ask ourselves if the potential to cause trauma is worth it. There are other, less traumatic ways, to gain the child’s cooperation and stop them from spiralling into a fight or flight response, such as:

For more information about the best ways you can prepare your child, support them, and hold them, check out Brooke’s eBook Supporting A Child Through Injections

Brooke Batchelor is a paediatric registered nurse who currently works in an Emergency Department in Far North Queensland. She is also a parent coach, qualified primary teacher and student Play Therapist. Brooke sits on the Board of Directors for the Association for the Well-being of Children in Healthcare, Australia. She created ‘The Paed Nurse’ in an aim to support parents & healthcare providers working with children.