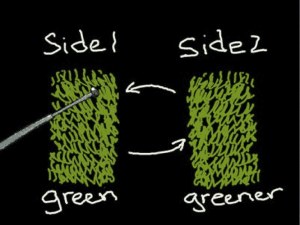 Why do we think the grass is always greener in some other pasture?

This powerful and ubiquitous experience is rooted in a human nature tendency called the focusing illusion.

The focusing illusion describes how humans make judgments.  Generally, we focus on a subset of data instead of all possible data.  You can probably identify salespeople and marketers leveraging this by focusing on what a particular product great, while neglecting to mention the downsides. This kind of priming or anchoring on a particular subset of data, is further reinforced because the human brain has a working memory capacity of about 3-5 data points at a time.  In other words, if you are thinking about a handful of things, your mental bandwidth can’t really hold the other dozen things that may be relevant.   In focusing heavily on a subset, we then give that data more weight and importance than it otherwise deserves.   This explains why, when attention is drawn to the possibility of a change in one significant aspect of life, the perceived effect of this change on well-being is likely to be exaggerated.

The focusing effect explains why, when we are dissatisfied with one or a few aspects of our jobs, we imagine that any job without those specific problems will be superior.  This ignores that many other facets that might be better, the same, or worse at any new position.  And, humans are programmed to ignore the familiar and mundane, freeing up precious neurons to focus in on potential threats, which explains why most people live in a default state of noticing what irritates them, while quickly acclimating to and then ignoring what is pleasant.

The focusing effect also influences our satisfaction with personal relationships – friendships, family, professional camaraderie, and especially our romantic relationships.  It is easy to find faults with one or two traits, and then give those substantial (and out of proportion) priority when comparing a relationship you have with a possible new one, or an ideal but hypothetical relationship.   For couples, this may lead one partner to imagine that any other mate without a few specific flaws will be a superior match.  He or she very well may be superior in the category of current focus, but could have (in fact, very likely will have) some other habits or features, compared to which, the current mate is far superior.  Very often, people move on from jobs, partners, cities, homes, and other situations in search of that greener pasture, only to find that their overall perceived life satisfaction is about the same.

Spoiler alert!  When you make a change in life circumstance, you still have to take YOU with you.  As my colleague and friend Vince Kopp says, you the common denominator in all of your problems. 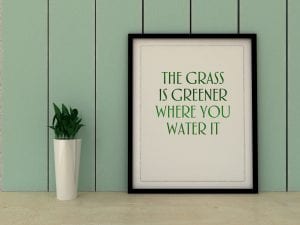 The solution?  Obviously, water your own grass.  Focus your attention (no really, with effort!) on the positive things in life.  These are often the familiar, and sometimes even mundane, which we’ve explained are often ignored or de-prioritized by our brains.   But as is famously said, the little things in life are the big things.  The neuroscience behind reframing and the power of attention choreography is well known.  So make a deliberate effort to do the things that make your brain happy: say and write positive words, smile, breathe, and do kind compassionate things for other people without expectation of reciprocity.  After all, science also tells us that is really is better to give than to receive, at least as far as our own perceptions of happiness and life satisfaction.

If you’ve made it this far, I hope you’ll stop to write down or say aloud (or even put in the comments, if you’re feeling brave) a few small – or large – fabulous things about your life, your relationships, or your work.  There is much to be happy about, if we make a deliberate and sustained effort to thwart evolution’s design that we focus only on the threats.

Marjorie Stiegler MD  is a Harvard-trained physician, patient safety expert, student of decision psychology, and healthcare social media strategist.  She is a cognitive science enthusiast, often focusing on bias, decision defaults, and leadership neuroscience.  This work has enriched her practice, and if you’re reading this, I hope it resonates with you as well.  We could all use a #nudge from time to time.