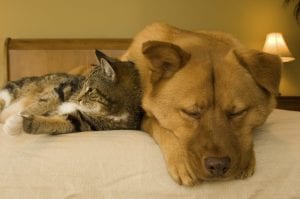 We share the same world as our pets, yet we do not perceive the same reality.

Both cats and dogs have only 20 per cent of the cone photo-receptor cells of humans, meaning they can only see the colours blue and yellow. All other colours are shades of grey. Dogs and cats also can’t focus on far distant objects. If any of us woke up one morning with the vision of our pet, we’d be visiting the optician immediately. The night vision of both dogs and cats is better than ours, however, probably out of evolutionary necessity.

The world also sounds different to cats and dogs. The hearing range of cats reaches an impressive two octaves higher than our own into ultrasound, with the noises made by bats and rodents as clearly audible to them as the shrieks of children are to us.

Human noses have around five million olfactory receptors, enabling us to sense odours. Cats have around ten to fourteen times this number while dogs have between 150 and 300 million receptors, making dogs’ sense of smell a thousand times acuter than ours. It is for exactly these reasons that detector dogs are used by Australian Border Force, and trained as Diabetic Alert Dogs as well as Seizure Alert Dogs for people living with epilepsy. In the United Kingdom, pioneering trials are being held to identify if Medical Detection Dogs can help in the early detection of a variety of cancers—including prostate, breast and others—offering a very different form of ‘lab test’.

Most animals, including cats and dogs, have an additional olfactory system, the vomeronasal organ (VNO), which falls somewhere between smell and taste. When they pause over a scent of interest, pulling their top lip upwards and opening their mouths partially for a few seconds, this smell/taste response is kicking in.

The abilities of our pets to hear and smell by far outstrips our own. And other animals have extraordinary perceptual ranges quite different from us. Cetaceans, like dolphins, actually ‘see’ in 3D using echolocation. Elephants communicate in a bass rumble which we can’t hear, but may feel, right in the solar plexus, if we happen to be standing nearby.

Most humans are strongly visual beings. We need to remember that what we see is a lot less vivid to our pets—and that they can hear and smell a much more engaging reality than we are ever aware of.

David Michie is the internationally best-selling author of a number of books about mindfulness, meditation and Buddhism. These include the non-fiction titles Why Mindfulness is Better than Chocolate, Hurry Up and Meditate and Buddhism for Busy People, as well as his popular novel series The Dalai Lama’s Cat. His books are available in 25 languages in over 30 different countries. He is a meditation coach and Mindful Safari guide. His latest book is Buddhism for Pet Lovers.